In June, Annelies Van de Ven (Melbourne University) joined us for a week to 3D scan a number of cuneiform clay tablets from the Böhl collection at the Netherlands Institute for the Near East. At the end of the week she gave a workshop to present the first results. We interviewed her during her work. 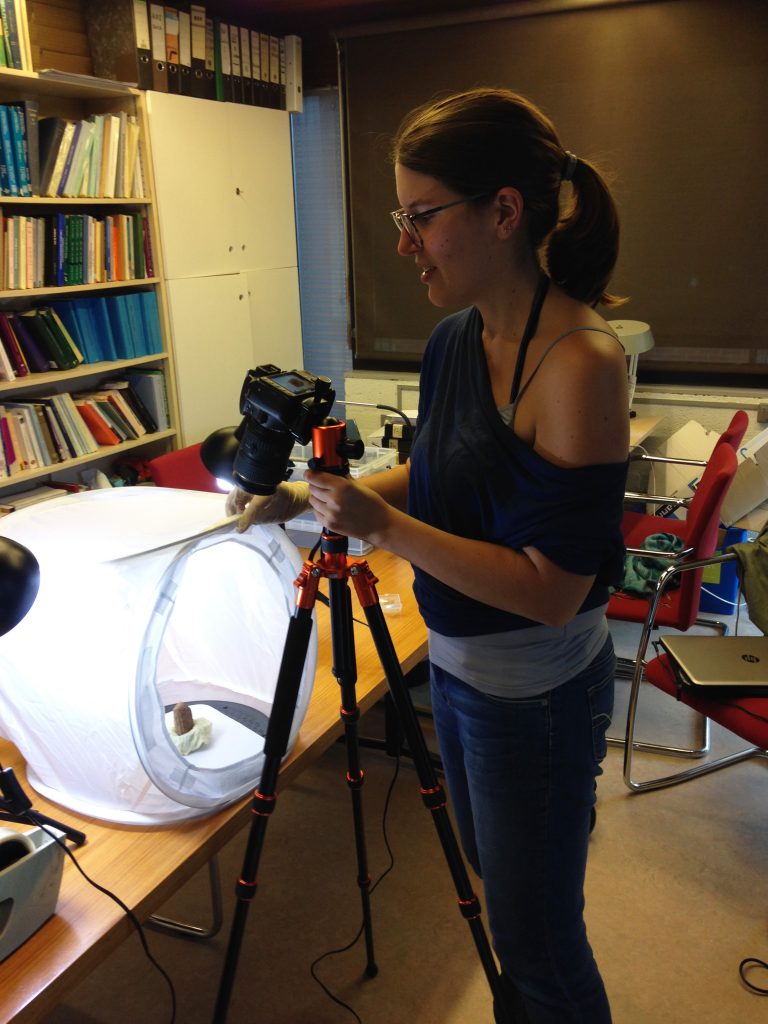 What is it you are doing?
I am digitally mapping a small part of the Böhl collection using photogrammetry and RTI [Reflectance Transformation Imaging].

What is the difference between those techniques?
Using photogrammetry, you essentially create a 3D model based on photos. You move the camera around an object, shooting it from all sides, and the software calculates the position of the camera. With RTI you rather move the light source while keeping still both the object and camera. The software calculates how the light is reflected, which gives you a very clear 2D image that allows you to see the texture of an object in detail.

At the moment, RTI cannot yet be converted to 3D, so it’s useful to apply both techniques. A 3D model of the tablet, to study the material context and spatial rendering of the text, and the RTI image that is more easily readable.

What other techniques can be used?
An often used technique is blue light scanning, for example with the handheld Artec scanner that combines photography with a laser. But these machines are expensive and can break down in the field. It’s easier and cheaper to bring a camera, white sheets and some lamps to your excavation. Custom officials of some countries are also not too fond of strange electronic devices such as blue light scanners.

Why is it important to 3D scan clay tablets?
The clay tablets in the Böhl collection have been baked. Many clay tablets in the field however are unfired, very brittle and disintegrating in front of your eyes. You want to map them as efficiently as possible, without moving them. Sketching takes a long time, and you can miss details. At the site of Ur in Iraq the tablets are brought to the museum at the end of each field season, so what do you do when you find 20 tablets on the last day? With photogrammetry and RTI you could capture everything and send the digital files to experts all over the world for interpretation. Your options are much less limited that way.

Also, it can be difficult to get access to archives and tablets in museums. Imagine if you are living in Iraq, and would like to visit the NINO, but cannot get a visa. In the near future, much more material will be digitised. I think we should strive to put everything online and provide access to everyone. Sometimes that is not possible. Museums say: If we tell everyone what’s in our archives, we will be a target for looting. But on the other hand there is the importance of sharing. People will also gain more understanding of why clay tablets are important if they can see them and learn from them.

In a museum exhibition, a visitor may see a tiny piece of baked clay. It is hard to imagine how such an object was made, used and stored, and why it is important to us now. Online we can present the tablets with much more context, really paint the bigger picture. That way you can more easily attract the interest of the public.

This tablet (LB 2043) is a Late-Babylonian legal document from Sippar. The enigmatic text records the transfer of *something* from the house of one man to that of another. On the reverse is a list of three witnesses.

What can we learn from clay tablets?
At Ur, we were excavating a house. Was it the dwelling of an ordinary person? An elite official? We know little about houses from this period. Most of the material culture was taken away, the site had been abandoned by its inhabitants. In the house we found a bunch of tablets with two names: the owner of the house, who was a general, and the name of a priest. Mostly they dealt in silver and goats. The priest worked in a temple a few hundred meters away. Suddenly we had a much better idea of how the city was laid out and how things were connected. It was a eureka moment: we knew who lived there, whom he was in contact with, what he did. That is something architecture fails to tell you.

What would you love to do in the future?
Teach digital methods to archaeologists in the Middle East. It is interesting for them to learn this extra skill, that they can apply in excavations and museums. They can teach it to others in turn. No need to import expensive scanners, just use a camera, tripod, and the material you have readily available. We have difficulty financing excavations, and for them it is the same.

How can we learn these skills ourselves?
Try it yourself to get the hang of the basics, do a lot of searching and testing. Watch a lot of tutorial videos, read a lot of forums. Much trial and error.

Learn more about RTI:
CHI (Cultural Heritage Imaging) has developed the RTI method, and they have an excellent forum. There is also a very good course by Kathryn Piquette at UCL, but there are costs involved.

The resulting 3D models will be made available online and used within the Persia and Babylonia outreach project Archives in Context.

One Reply to “3D scanning and the future of clay tablets”